The Zambian cotton industry was going great by most accounts at the start of the PROFIT project.  PROFIT was a USAID funded project that was designed to foster increased competitiveness in the agricultural sector leading to increased poverty reduction.  During the early stages of the project it was assessed and agreed to that the cotton industry provided an excellent opportunity to build upon the success at the time of multiple years of growth according to many economic and donor analyses. 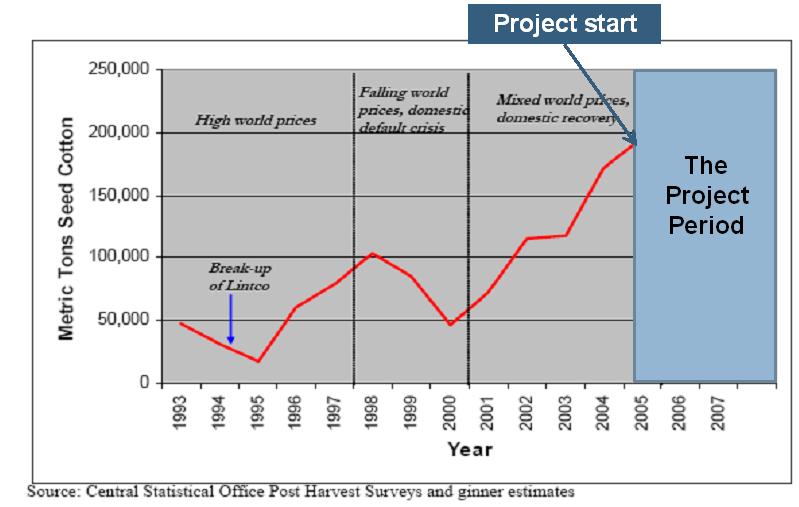 As the project conducted its own analysis to confirm early desk studies it saw a very different picture.  It saw stagnant yields, increasing competition between processers based on win-lose outcomes, and increasing distrust between all players in the value chain.  It also saw very few benefits accruing to farmers or firms in the system, including an unhealthy concentration of risk at the processer level.  The growth had been narrowly defined by overall production and number of farmers getting input via a processer.  The project also identified that farmers did not feel the land or cotton was theirs – they got free inputs, they worked a bit on the land resulting in limited yields, then gave the cotton back to the company for a very small amount of money – they were simply selling their labour because they had no other options. 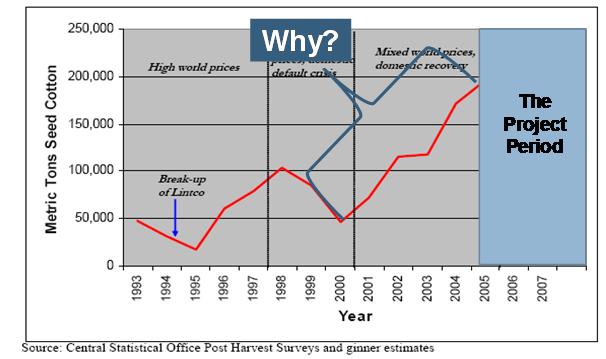 Faced with this conclusion that ran counter to the overwhelming perspective in the industry that things were great, the project decided to meet with various processors to offer assistance in restructuring the way they did business to specifically improve performance on farmer yields and overall profitability.  As you would guess, the project’s attempts to engage the industry failed except for some support to train farmers – mostly on things they had been trained on before and did not adopt.

The conditions that had allowed the Zambian cotton industry to continue growth despite high inefficiency eroded from 2006 onwards.  Specifically, cotton prices were trending downwards, options for farmers to sell their labour was increasing, the local currency was appreciating rapidly, and levels of risk at the processer level left very little room for error.  Within a short period of time cotton processers, who had stopped engaging with the project came back to ask if the project could re-engage. 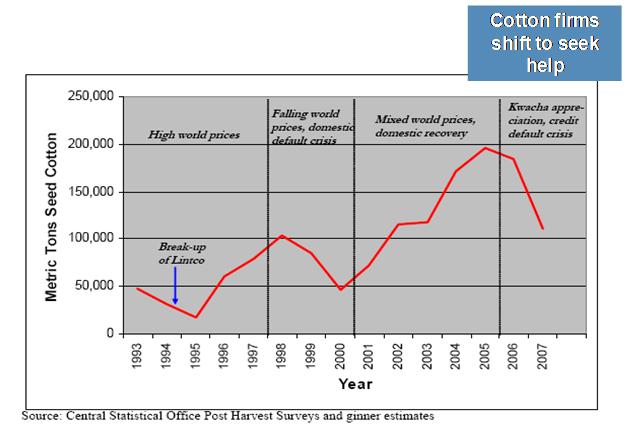 The project then worked with a range of processing firms to get them to shift the way they managed farmer-suppliers in order to reduce risks to supply by investing primarily in the better farmers.  While the project had some success in getting firms to improve the way they manage their supply chains resulting in improved relationships between farmers and processors, the project failed to keep the industry from entering a period of distress.  From a peak of upwards of six firms, there are only a few that survive today.    Today though, the firms that are functioning are much better at understanding how to learn and how to manage failure by focusing on key measures like productivity and win-win outcomes so that when failure does come they can learn quickly and adjust effectively.

So while it is true that from one perspective the project was a failure in that its interventions did not stop the downturn and the cotton industry is much smaller, the project seems to have fostered a stronger systemic foundation. The remaining value chain system relationships have become more effective (win-win) and through their improvements have fostered new services (i.e., spraying and land preparation) to evolve in the rural areas.  Yields have increased and the farmers that remain seem more focused on being cotton farmers as opposed to labourers.  In the end the real success or failure of the project will be if the cotton sector continues to fail in order to learn and learn how to fail effectively.